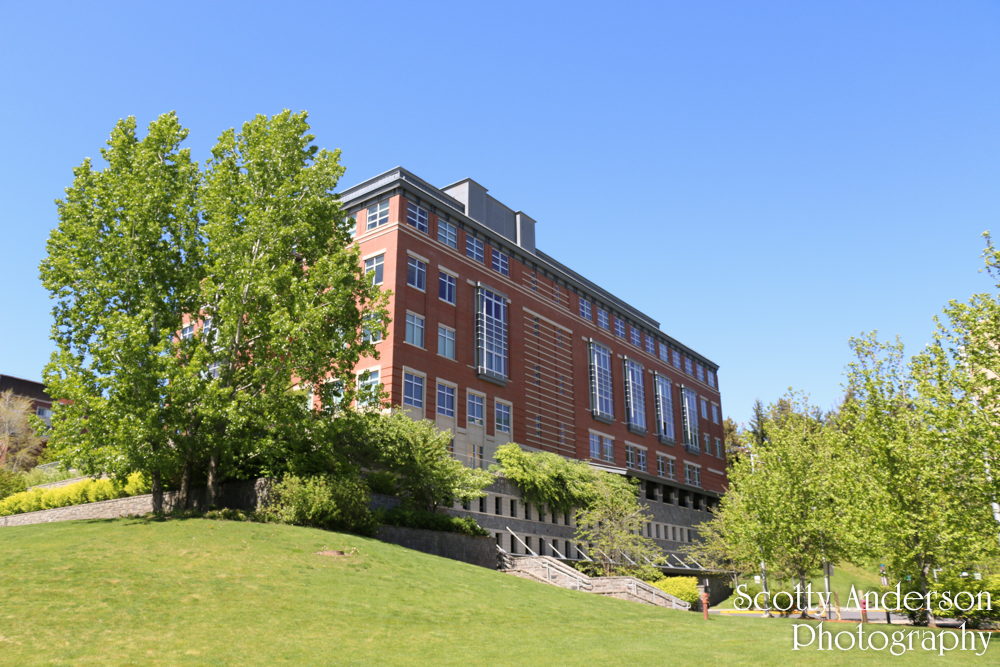 On May 1st, 2016 I took a five hour walking photo shoot of a large portion of the central WSU Campus. I have wanted to do this project for a long time and today was a great day to do it. The sun was shining and the sky was blue. I don’t know the exact distance I walked today but it was a lot.

The point of the project is to document that way campus looks at this current time. Over the years I have seen many changes and it is always interesting to look at old photos of the old buildings that are long since gone. The views from various points of campus change with the addition of a new building or the razing of an old building.

There are a couple projects that are about to get underway and I wanted to get the photos before the projects started. The Floyd Multicultural Center will be built between Main Street and Spokane Street along Stadium Way. The area is currently a walking path and a green area. The Public Safety Building with housed the WSU Fire Department (until 2005) and the WSU Police Department (until later this summer). The building will be razed.

I missed out on some opportunities. A portion of KMac was torn down. The front of the old Bookie was torn off. The parking lot and green area south of Owen Science Library already has a new building underway. Troy Hall is under renovation and currently is a shell. I do not have those areas documented before the changes took place. But I finally have my start.

In addition to documenting what campus looked like I hoped to get some neat shots of some of the buildings. In the description of the photos I tried to give some perspective to where I was when the photo was taken. I also included some information about the buildings or areas.

I ended up taking 939 photos during this walking tour of campus. I still have a number of places I never made it to. I was actually running out of time. I plan on making another trip to get more areas that I didn’t make it to this time around.

(this is a long description of the path I took, you can skip over it if you choose)
I have 138 photos in this set. The are in the order I took the photos as I moved around campus. The path I took: Fire Art Parking garage (where I parked). Out to Stadium Way. I turned up Troy Lane and then up College Ave. I went down to Stimson Hall and walked between it and Webster Physical Science. Then in front of Neill Hall and to the back side of Waller Hall. I went up to the parking lot of Stimson and Waller then to Nevada Street. I walked along Waller Hall’s walkway and then out to the grassy area to the south of Waller Hall. I went back to Waller Hall and then across Olympia Ave to Washington Street. I headed west on Washington Street to the parking lot behind the Washington Building (old Pullman Regional Hospital). I walked around to the south side of the Washington Building to the area that I believe to be a portion of the old Finch Memorial Hospital. I walked down the green area behind the hospital to Stadium Way. I went to Spokane Street and then I walked down Stadium Way to Main Street and then back up to Spokane Street. I went on the walking path on the green area between Spokane Street and Main Street (the future home of the Floyd Multicultural Center). I followed the path to the Yellow Parking lot near Washington Street at Spokane Street. I continued north on Spokane Street to Columbia Street and then to College Ave. I continued past Dana Hall towards EE/ME. I crossed the street to the east and up the stairway that leads to Carpenter Hall and the large lawn on the west side of Thompson Hall. I walked north on the walkway on the west side of the grassy area to the footbridge over Spokane Street. I walked across the footbridge. I turned around and went back across the foot bridge towards the lawn on the west side of Thompson Hall. I continued north on the walkway on the west side of the lawn until I was near Honors Hall (the old White Hall). I walked west down the stairs and crossed over Spokane Street. I continued along the walkway west past the back side of the President’s Residence. I continued through the Historical Arch replica down to Albrook Hydraulic Lab and the Oak Street turnaround. I then walked east on the walkway back towards Spokane Street. I crossed the street and up the stairs to the lawn on the west side of Thompson Hall. I continued east on the walkway all the way to Thompson Hall. I walked north around Thompson Hall and up to Veterans Way. I walked south of Veterans Way past the Veterans Memorial, Thompson Hall, Jackson Hall, to Goertzen Hall. I walked on the patio area on the south side of the building all the way to the western most point of the patio. Then went back to the stairway between Goertzen Hall and Morrill Hall. I walked west on the walkway to the west side of Morrill Hall. I went around Morrill Hall back out to Veterans Way. I then headed south a little more on Veterans Way and stopped at Daggy Hall. I went through the old Murrow parking lot where the big satellite dishes used to be housed. I got on the walkway that heads north between Murrow Hall and Jackson Hall. At the end of Jackson Hall is a large grassy area that has Jackson Hall on the south, Stevens Hall to the north, Bryan Hall to the east, and the Veterans Memorial and Veterans Way to the west. I walked through the grassy area west down to the Veterans Memorial. I then went east up the grassy area past the Lowell Elm and Senior Bench. I ended at the Hello Walk on the front side of Bryan Hall. I then took Hello Walk north all the way to Campus Street. I walked up Campus Street to Library Road. At Van Doren Hall I took the walkway that leads east past the front of Van Doren Hall. I continued to the northwest corner Holland Library. I followed the walkway along the west side of Holland Library south to the old main entrance to Holland Library on the southwest corner of the building. I then rounded the corner and walked along the south side of Holland Library. I then walked to the Glenn Terrell Friendship Mall. I walked east on the Terrell Mall past College Hall, Tood Addition, the Compton Union Building (CUB), and to Wilson-Short Hall. I turned south on Troy Land and walked to the plaza of the Smith Center for Undergraduate Education (CUE). Then I went back up Troy Lane to Wilson Road. I walked around the Public Safety Building and back out to Wilson Road. I then walked east on Wilson Road to the French Ad footbridge. I went halfway across the footbridge and then back to Wilson Road. I continued east on Wilson Road to Stadium Way. I then walked south on Stadium Way to the Grimes Way intersection. I then went back into the parking garage which ended my photo shoot for the day.

After completing the 939 photo shoot I had to work to download and go through all the photos. It takes a while to get through all those photos. I chose 138 to include in this photoset. I have 801 photos that didn’t make the cut. I then had to spend a lot of time organizing the information attached to each photo in this set.

In all this project has taken around 25 hours to complete. I hope you enjoy the photos as much as I did taking them. Again the goal of this project is to document the way campus look in May of 2016. I wanted to get photos of buildings as well as sight-lines and overall views of an area.