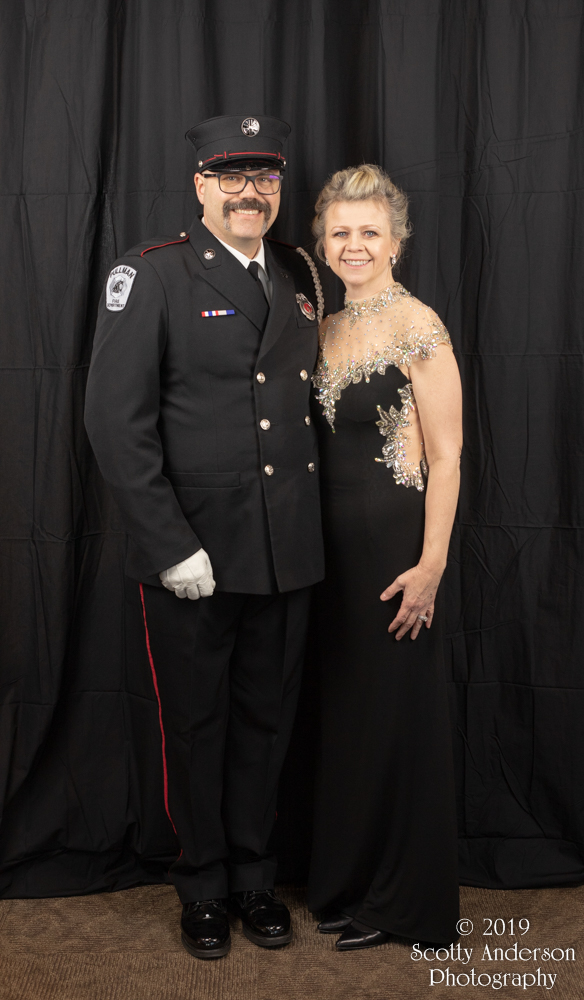 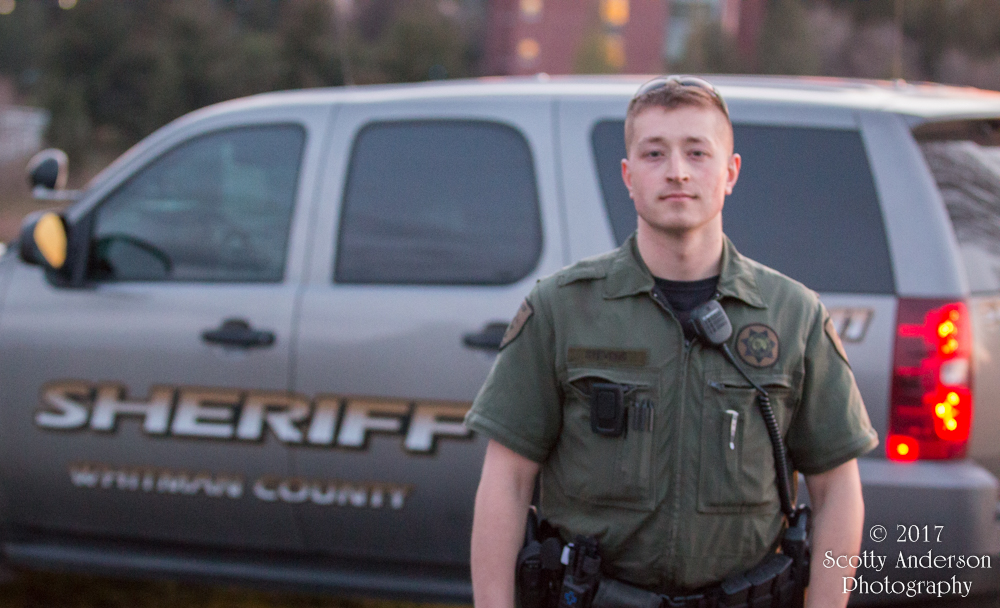 On Saturday afternoon I had a chance to ride along with Deputy Stevens from the Whitman County Sheriff’s Office.

We went to the WSU campus to do a couple photos of him with some of the campus in the background. We didn’t make it there until the sun was really setting. This causes some troubles with the backlighting and the lack of lighting for the foreground. I ended up shooting from a different angle so we didn’t get the campus as the backdrop as wanted. 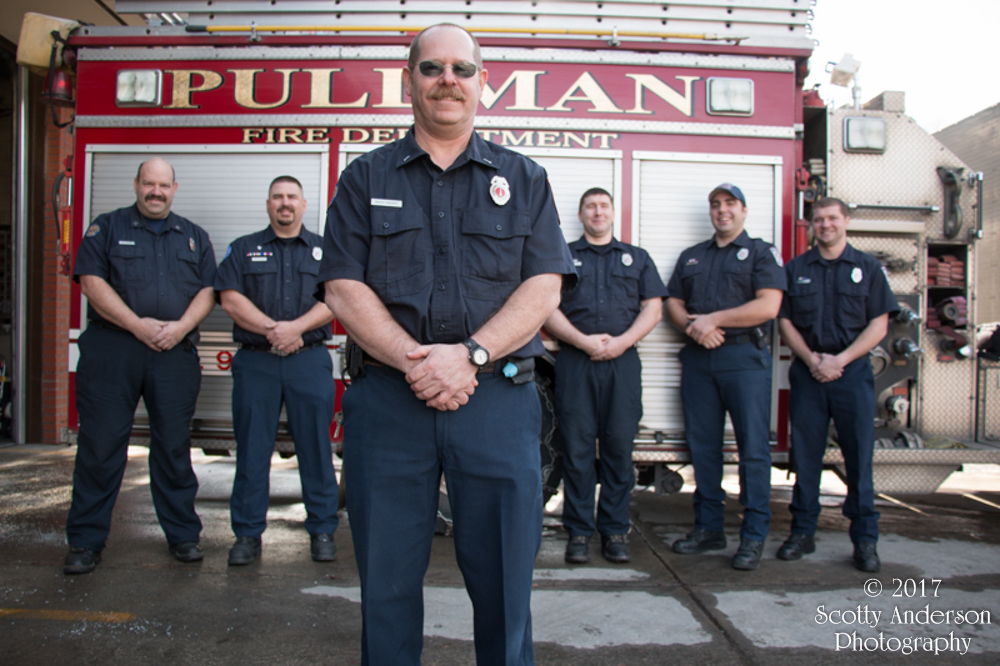 On January 29th, 2017 at 0800 Lieutenant Rudy Fisher walked into Pullman Fire Station 32 (the Deuce) for his final time as a member of the Pullman Fire Department. 24-hours later Lt. Fisher would be given the flag that was flying over the station in a ceremony performed by the Pullman Fire Honor Guard. The flag was handed to Lt. Fisher by Chief Mike Heston.

Lt. Fisher along with Firefighters McPherson, Gibbons, and Krieger worked his final shift on the north side of Pullman answering calls for service.

During the day I had the opportunity to shoot some photos with Lt. Fisher and his wife, Lisa. We took the photoshoot to Station 31 to include the men working there. Captain Reiber, Firefighters Gollnick, Erickson, and Branson where covering the south part of Pullman.

All the members of both stations took part in the photoshoot. I have included a hand full of the photos.

At 0800 on January 30th, 2017 Lt. Fisher’s final shift came to an end. The Honor Guard marched to the flag pole, lowered the American Flag, folded it, and it was ultimately presented to Lt. Fisher.

Again I was on hand to take photos of the Flag Ceremony and the celebration that took place afterwards in the Deuce. This was a great opportunity for people to congratulate Lt. Fisher on his retirement. Several retired firefighters made their way to the celebration. I tried to get as many photos as I could with newly-retired Lt. Fisher and the people in attendance.

Nearly a quarter-century, on February 10, 1992, Rudy Fisher was hired as a city of Pullman Firefighter by the late Chief Pat Wilkins. When Rudy was hired the main fire station on South Grand was the career station. The Deuce was the reserve station. That all changed in 2005 when WSU stopped providing their own fire services and started to use the City of Pullman Fire Department. At that time the Deuce was made into a career and reserve fire station. At the same time Lieutenants were added to the rank of firefighters. Rudy was selected as one of the first three Lieutenants of Pullman Fire.

I had the opportunity ask Rudy some questions about his quarter-century run at being a city of Pullman Firefighter.

My first question is the typical question that many people ask. Why did you want to be a firefighter? He said “First of all I wanted to help others in a time of need. I wanted a challenge and I loved the problem solving aspect that this career choice offered every day.”

Of all the events, calls, and activities what one(s) sticks out in his mind? Rudy responded by saying “Infants and young children calls left the most lasting impressions on me. Creative activities by the student population are too numerous to list but did make me chuckle and / or scratch my head in amazement.”

Firefighters seem to have a favorite apparatus and Rudy was no different. I had a feeling that I already knew the answer before I asked, but I wanted to know what his favorite apparatus was. He said “The H & W (E32) was the first Red Engine in the fleet. It looked great and was very user friendly.” That was the engine we used to base the crew photos during the photoshoot. It also happens to be the engine Rudy requested for that purpose.

For anyone thinking about becoming a firefighter Rudy suggests “You need to have thick skin, roll with the punches, adapt and overcome, be patient, and have a passion to help others.”

I asked Rudy to look back at the Pullman Fire Department he joined 25 years ago compared to today. I then asked what he thought was the most important/best change that had taken place. Rudy said “Transitioning from a BLS (Basic Life Support) service to ALS (Advanced Life Support) [emergency medical] service.” Rudy was there for the transition and saw the difference that a paramedic can make in the positive outcome when someone is in dire straits.

Finally I asked Rudy if there was anything he would like to add, say as words or wisdom, or give a farewell statement. Rudy closed by saying “I believe a person should stand up for what’s right and true. Be accountable for your actions. Learn how to think and not what to think. Treasure your friends and family as time goes by really fast. Never regret a day in your life: good days give happiness, bad days give experience, worst days give lessons, and best days give memories.”

Thank you Lt. Rudy Fisher for your service to the City of Pullman and surrounding communities. 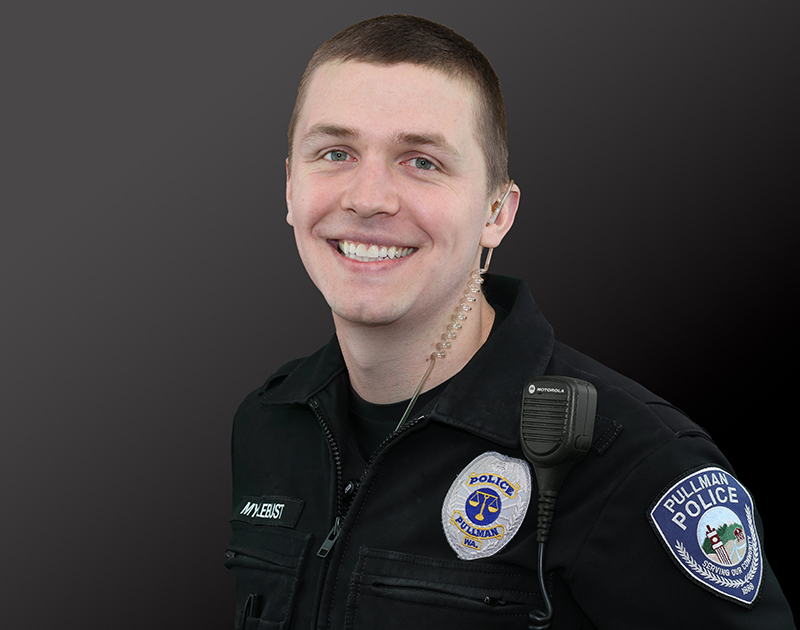 With the help of a couple friends I have been testing some new equipment and methods for removing the green screen and cast for portraits.

Each set of two photos is a before and after editing with Lightroom and Photoshop. The first set is my friend Jeff. My settings for the camera were iso-100, f/8, 1/25 sec.

The second two sets are my friend Patrick. My settings for both sets were iso-100, f/5, 1/125 sec. An indirect flash was also used on both of Patrick’s sets.

Green screen and cast removal methods are from the Photoshop Mama video series on youtube. The first of the series can be found at https://www.youtube.com/watch?v=K2IIfMjf_iI